The Navajo Nation covers about 17,544,500 acres (27,413 sq mi), occupying portions of northeastern Arizona, southeastern Utah, and northwestern New Mexico in the United States. This is the largest land area retained by an indigenous tribe in the United States. Within this vast territory, you will discover magnificent landmarks and attractions that are central to Navajo pride and identity. 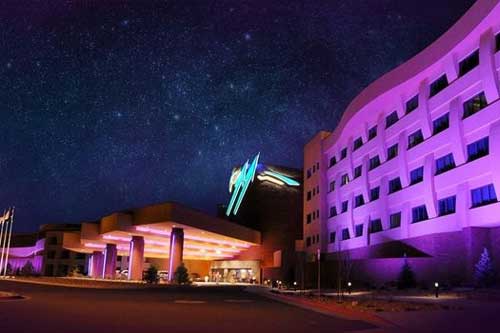 Temporarily closed due to the pandemic, Twin Arrows Casino Resort, once it reopens, will take your GAME to a whole NEW level.

Tucked within a picturesque view of the majestic San Francisco Peaks just east of Flagstaff, Twin Arrows is the centerpiece of the Navajo Nation Gaming Enterprise’s properties. Here, art and architecture have combined to both embody and showcase the rich history of the Navajo people, while providing an unparalleled casino resort experience. Along with exceptional Vegas-style casino gaming, Twin Arrows is also known for the lavish resort amenities, including luxury guest rooms (available in three configurations), gourmet dining, culturally infused casual dining, a fitness center, heated indoor pool and more than 11,000 square feet of state-of-the-art meeting space.

Twin Arrows is the ONLY AAA Four Diamond awarded Casino Resort in Northern Arizona, and ranked #1 Best Hotel in the Grand Canyon region by US News and World Report! 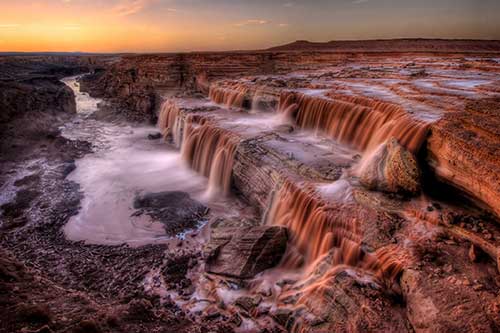 Grand Falls (also known as the ‘Chocolate Falls’) is over 181 feet tall, and occurs when the monsoon season hits northern Arizona and during snow melt from the winter snowstorms. The falls are fed by the Little Colorado River with water coming from Mount Baldy, located 140 miles southeast, and several other smaller creeks from the Colorado Plateau.

During the rest of the year, the falls do not appear, but as a trickle of water. You can plan your trip by observing the water level gauge reading provided by the USGS website, make sure the reading is above 100 per cubic feet. If the reading is in the thousands, plan to visit the Grand Falls within 48 hours. 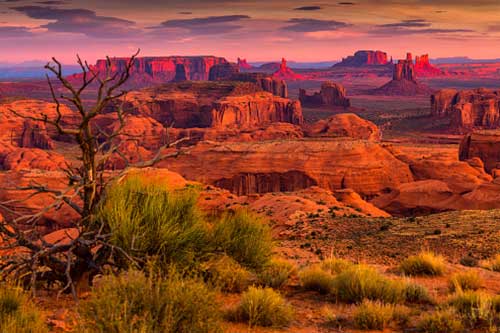 The Navajo Nation’s Monument Valley Park (Navajo Name: Tse’Bii’Ndzisgaii). You are experiencing one of the most majestic – and most photographed – points on earth. Covering 91,696 acres (spanning Utah & Arizona) with an elevation 5,564 feet above sea level, this great valley boasts sandstone masterpieces that tower at heights of 400 to 1,000 feet, framed by scenic clouds casting shadows that graciously roam the desert floor. The angle of the sun accents these graceful formations, providing scenery that is simply spellbinding.

The landscape overwhelms, not just by its beauty but also by its size. The fragile pinnacles of rock are surrounded by miles of mesas and buttes, shrubs and trees, and windblown sand, all comprising the magnificent colors of the valley. All of this harmoniously combines to make Monument Valley a truly wondrous experience. Enjoy this beautiful land. 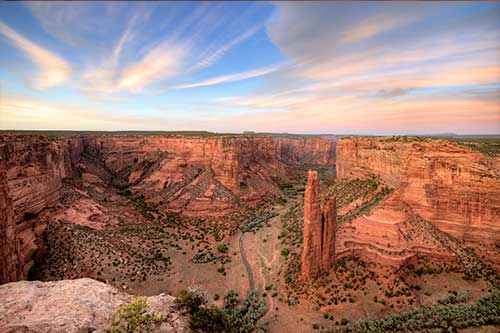 Canyon de Chelly long served as a home for Navajo people before it was invaded by forces led by future New Mexico governor Lt. Antonio Narbona in 1805. In 1863, Col. Kit Carson sent troops through the canyon, killing 23 Indians, seizing 200 sheep, and destroying hogans, as well as peach orchards and other crops. The resulting demoralization led to the surrender of the Navajos and their removal to Bosque Redondo, New Mexico.

Canyon de Chelly National Monument (/dəˈʃeɪ/ də-SHAY) was established on April 1, 1931, as a unit of the National Park Service. Located in northeastern Arizona, it is within the boundaries of the Navajo Nation and lies in the Four Corners region. Reflecting one of the longest continuously inhabited landscapes of North America, it preserves ruins of the indigenous tribes that lived in the area, from the Ancestral Puebloans (formerly known as Anasazi) to the Navajo. The monument covers 83,840 acres (131 sq mi; 339 sq km) and encompasses the floors and rims of the three major canyons: de Chelly, del Muerto, and Monument. These canyons were cut by streams with headwaters in the Chuska Mountains just to the east of the monument. None of the land is federally owned. Canyon de Chelly is one of the most visited national monuments in the United States. 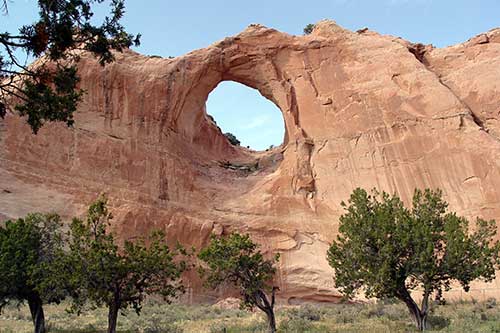 This small park established sometime around 1936, features the graceful red sandstone arch for which the capital is named Tségháhoodzání (Window Rock). It is located just a few feet north of the Navajo Nation Office of the President and Vice-President building, the Navajo Nation Council Chambers, and other administrative offices.

In 1936, the Navajo Nation headquarters and other government offices were built in close proximity to this arch, due to its history and cultural significance, particularly with the Waterway Ceremony. In Navajo culture and history, there was once a water pond right below the arch opening on the ground, a Navajo medicine man would collect this water to use in the Waterway Ceremony. This location was one of four sacred water ponds. Although today, you likely won’t witness a ceremonial water collection while visiting. But nonetheless, the area should be respected and there is no climbing allowed onto the Window Rock arch or its surrounding sandstone formations. 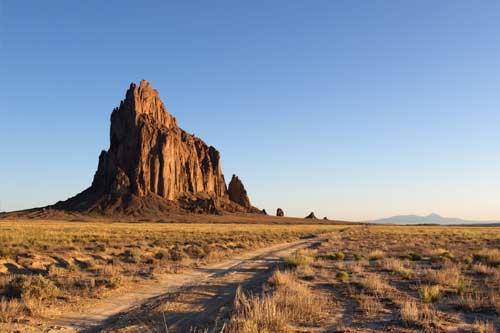 Located 15 miles southwest of the town of Shiprock, New Mexico is a unique towering, bird-like volcanic rock formation that can be seen for miles in all directions. Shiprock, as this mighty sand-colored column was named by Anglo settlers, is known to the Navajo as “Tsé Bit’ a’í", or rock with wings. The peak is 7,178 above sea level, and is at the center of three volcanic pressure ridges that pushed the rock skyward millennia ago.

As this rock formation is sacred to the Navajos – hiking and/or climbing on the sacred peak or its surrounding rocks is forbidden. Also driving onto the dirt road leading to the formation is prohibited – please view and photograph the pinnacle from the paved roadway (Indian Service Route 13 or from US Highway 491). Oversight is provided by the local communities. There are no facilities in the vicinity. 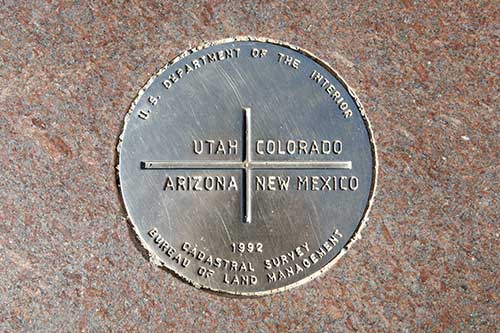 The Four Corners Monument marks the quadripoint in the Southwestern United States where the states of Arizona, Colorado, New Mexico, and Utah meet. It is the only point in the United States shared by four states, leading to the area being named the Four Corners region. The monument also marks the boundary between two semi-autonomous Native American governments, the Navajo Nation, which maintains the monument as a tourist attraction, and the Ute Mountain Ute Tribe Reservation.

The origins of the state boundaries marked by the monument occurred just prior to, and during, the American Civil War, when the United States Congress acted to form governments in the area to combat the spread of slavery to the region. When the early territories were formed, their boundaries were designated along meridian and parallel lines. Beginning in the 1860s, these lines were surveyed and marked. These early surveys included some errors, but even so, the markers placed became the legal boundaries, superseding the written descriptions of geographical meridians and parallels. This includes the Four Corners Monument, which has been legally established as the corner of the four states. 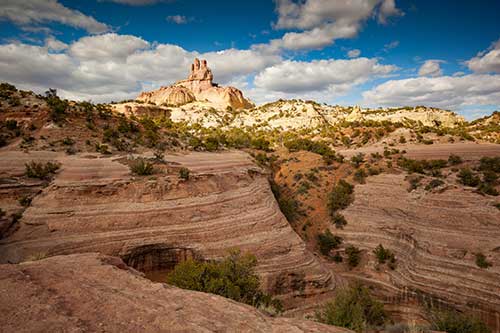 Red Rock, located on the Navajo Nation near the New Mexico border, 16 miles (26 km) northeast of Lukachukai, is named after the majestic 386-foot-high (118 m) red sandstone peak that is nearby. Formation began 280 Million years ago during the Mesozoic Era, sometimes referred to as the Age of the Dinosaurs. The area now features the popular attractions of Red Rock Park, with picturesque hiking trails and RV accommodations; Red Rock Museum which chronicles the lives and culture of the Anasazi as well as the present-day Zuni, Hopi and Navajo with interpretive exhibits, plus permanent displays of Kachinas, pottery, rugs, silver, and turquoise as well as traveling art exhibits; a post office, convention center and lastly, the historic Outlaw Trading Post, which was built in 1888. 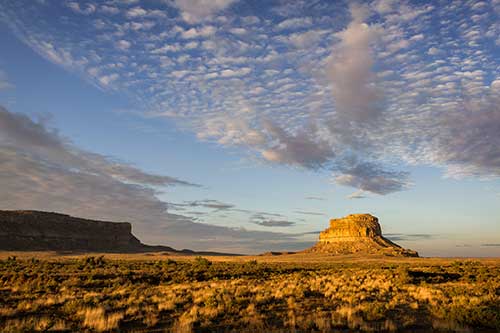 Chaco Culture National Historical Park is a United States National Historical Park in the American Southwest hosting a concentration of pueblos. The park is located in northwestern New Mexico, between Albuquerque and Farmington, in a remote canyon cut by the Chaco Wash. Containing the most sweeping collection of ancient ruins north of Mexico, the park preserves one of the most important pre-Columbian cultural and historical areas in the United States.

Between AD 900 and 1150, Chaco Canyon was a major center of culture for the Ancestral Puebloans. Chacoans quarried sandstone blocks and hauled timber from great distances, assembling fifteen major complexes that remained the largest buildings ever built in North America until the 19th century. Evidence of archaeoastronomy at Chaco has been proposed, with the “Sun Dagger" petroglyph at Fajada Butte a popular example. Many Chacoan buildings may have been aligned to capture the solar and lunar cycles, requiring generations of astronomical observations and centuries of skillfully coordinated construction. Climate change is thought to have led to the emigration of Chacoans and the eventual abandonment of the canyon, beginning with a fifty-year drought commencing in 1130. 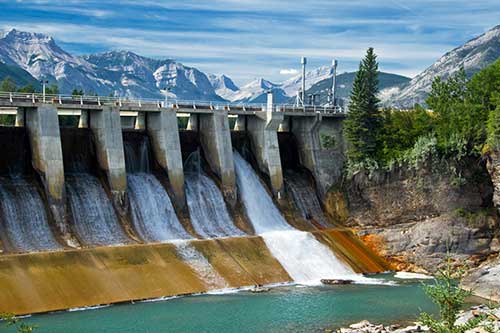 Navajo Dam is a dam on the San Juan River, a tributary of the Colorado River, in northwestern New Mexico in the United States. The 402-foot (123 m) high earthen dam is situated in the foothills of the San Juan Mountains about 44 miles (71 km) upstream and east of Farmington, New Mexico. It was built by the U.S. Bureau of Reclamation (Reclamation) in the 1960s to provide flood control, irrigation, domestic and industrial water supply, and storage for droughts. A small hydroelectric power plant was added in the 1980s.

The dam is a major feature of the Colorado River Storage Project, which is designed to regulate water resources across the entire Upper Colorado River Basin. The reservoir, Navajo Lake, is a popular recreation area and one of the largest bodies of water in New Mexico, with its upper portion extending into Colorado. For thousands of years, the area has been continuously inhabited by Native Americans, who built settlements within the canyon and its many caves. The Pueblo people considered the Grand Canyon a holy site, and made pilgrimages to it. The first European known to have viewed the Grand Canyon was García López de Cárdenas from Spain, who arrived in 1540. 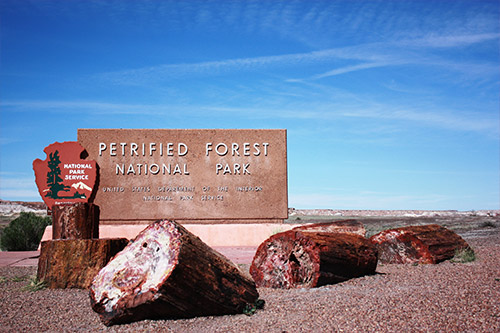 Petrified Forest National Park is an American national park in Navajo and Apache counties in northeastern Arizona. Named for its large deposits of petrified wood, the public areas of the park cover about 230 square miles, encompassing semi-desert shrub steppe as well as highly eroded and colorful badlands. The park’s headquarters is about 26 miles (42 km) east of Holbrook along Interstate 40 (I-40), which parallels the BNSF Railway’s Southern Transcon, the Puerco River, and historic U.S. Route 66, all crossing the park roughly east–west. The site, the northern part of which extends into the Painted Desert, was declared a national monument in 1906 and a national park in 1962. Typical visitor activities include sightseeing, photography, hiking, and backpacking.

Averaging about 5,400 feet (1,600 m) in elevation, the park has a dry windy climate with temperatures that vary from summer highs of about 100 °F (38 °C) to winter lows well below freezing. More than 400 species of plants, dominated by grasses such as bunchgrass, blue grama, and sacaton, are found in the park. Fauna include larger animals such as pronghorns, coyotes, and bobcats, many smaller animals, such as deer mice, snakes, lizards, seven kinds of amphibians, and more than 200 species of birds, some of which are permanent residents and many of which are migratory.